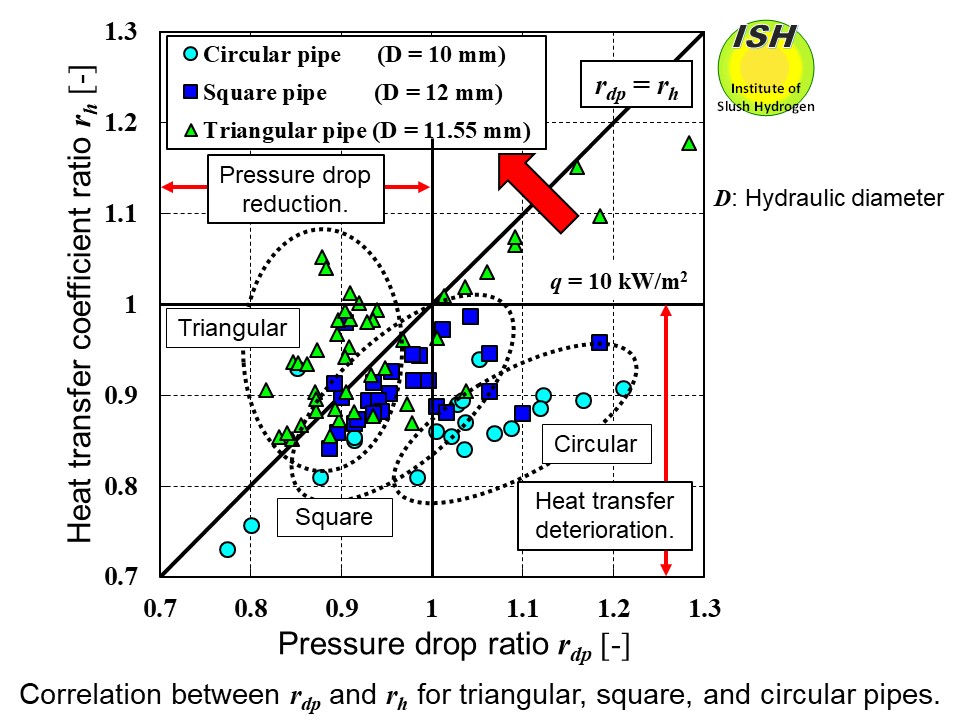 Although the maximum pressure drop reduction and the maximum heat transfer deterioration for a circular pipe are greater than those for triangular and square pipes as described in "circular pipe flow" and "triangular pipe flow", rh for the triangular pipe tends to be greater than rdp ( rh > rdp).
In order to confirm this phenomenon, the numerical analysis code (SLUSH-3D) we developed is utilized to consider the distribution of turbulent energy k in liquid nitrogen for unheated slush nitrogen flowing through the circular pipe (D = 15 mm) and a triangular pipe (Type A) with sides of 26 mm (D = 15 mm) having the same hydraulic diameter as for the circular pipe (refer to "Numerical analysis of slush flow by SLUSH-3D"). These analysis results are also presented in the figure below.

In the case of circular pipe, the flow becomes pseudo-homogeneous as the flow velocity increases, and the majority of the solid particles move towards the pipe center region as shown at the upper left side of the figure below.
In the case of triangular pipe as well, most of the solid particles are considered to be flowing at the pipe center region, where there is low turbulent energy as indicated at the lower right side of the figure below. The presence in the three apexes of a substantial liquid layer having few solid particles means that direct interference between the solid particles and the pipe wall is lessened. As a result, pressure drop decreases in comparison with circular pipe. As indicated at the upper right side of the figure below, due to the secondary flows along the pipe wall near the apex, heated liquid in the pipe wall vicinity is dispersed towards the pipe center, such that the triangular pipe is considered to promote heat transfer.

In square pipe as well, the magnitude of average turbulent energy kav, not presented here [27], is between the values for triangular and circular pipes. Given that the amount of liquid layer at the four apexes is not as great as in the case of triangular pipe, the influence of the liquid layer is considered to be less in the square pipe. Accordingly, the above figure also shows a similar ordering of properties.

Given that heat transfer deterioration is normally undesirable, the selection of pipe cross-sectional shape might depend on whether greater emphasis is being placed on pressure drop or heat transfer in the specific design of heat transfer piping for slush fluids.
For example, in a long-distance pipeline for the exclusive transport of slush hydrogen, circular pipe characterized by substantial pressure drop reduction would be suitable from the standpoint of reduced pumping power. For refrigerant piping in a high-temperature superconducting power transmission system, the pipe cross-section (circular or rectangular) would be important in terms of heat transfer properties to prevent quench propagation. Meanwhile, in the case of heat exchanger, it would be effective from a design perspective to select triangular flow passage as a cross-sectional shape that would limit heat transfer deterioration.

From experimental data points for the unheated triangular pipe (Type A, B, and C) and the unheated circular pipes with inner diameters of 10 mm and 15mm, the least squares approximation method was utilized to derive the second correlation equation for the integrated prediction of the pipe friction factor in both triangular and circular pipes, taking into account pressure drop reduction. 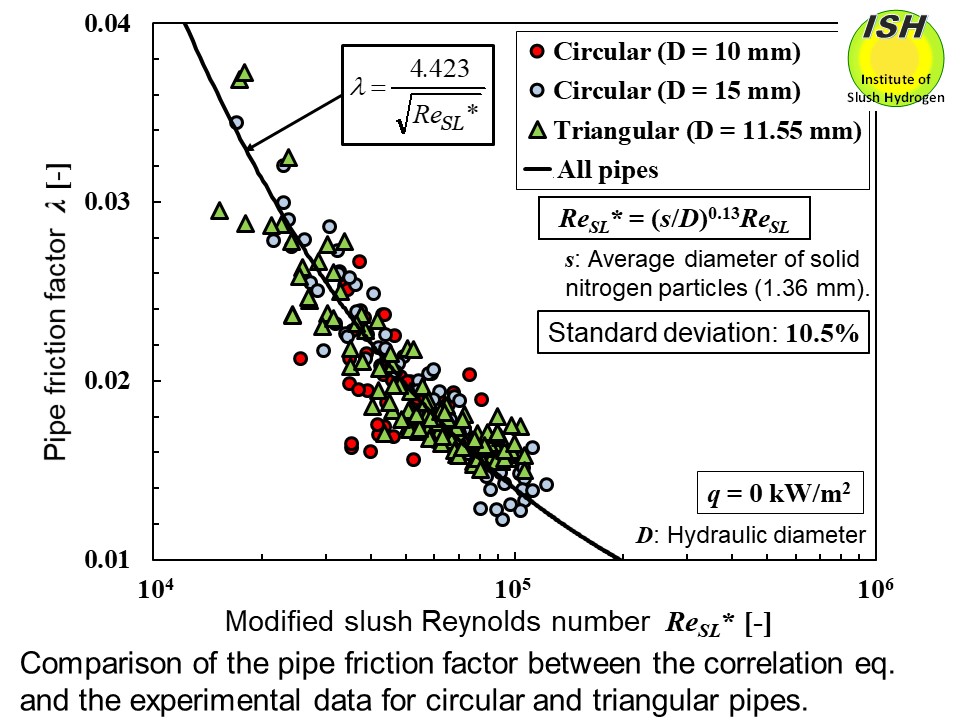