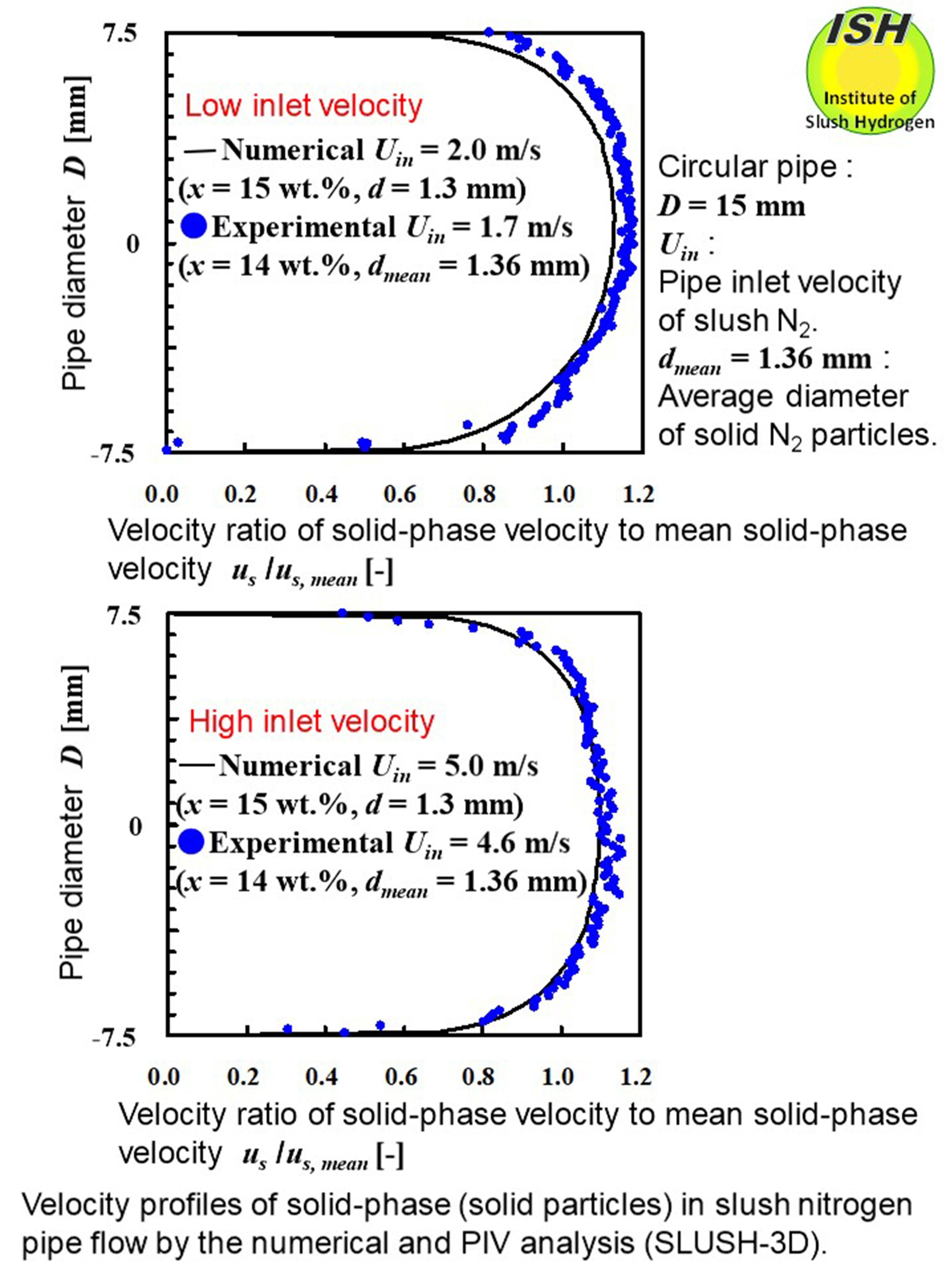 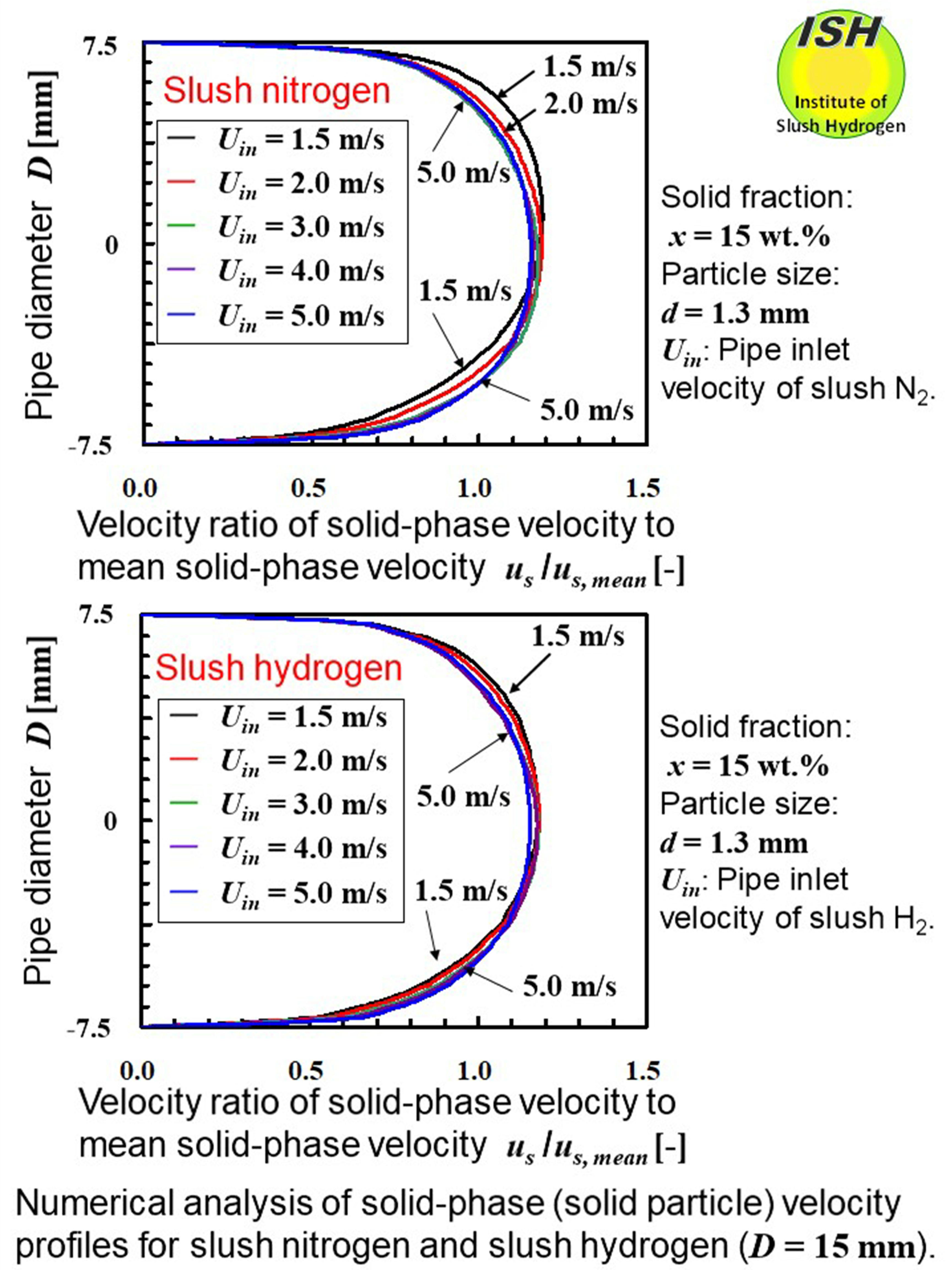 The left side of the above figure shows the calculation results of the velocity distribution of the solid phase in flow direction for slush nitrogen at low and high pipe inlet flow velocities. This figure also shows the velocity distribution of solid nitrogen particles in flow direction as shown in the PIV experiments* using solid nitrogen particles directly as the tracer (refer to the figure in "Circular pipe flow and PIV").
The horizontal circular pipe used in the numerical analyses and slush nitrogen experiments had an inner diameter of 15 mm. The horizontal axis shows the solid phase flow velocity normalized for the average velocity, and the vertical axis shows the point where the pipe’s central axis intersects the vertical plane.
At both low and high flow velocities, the results of the numerical analysis are in good agreement with the results of the PIV experiment*. Further, the results of the numerical analysis of pressure drop analysis in liquid nitrogen, which are not shown here, are in good agreement with calculated values for pressure drop in horizontal circular pipes using the Prandtl-Karman eq. Based on the above results, we conclude that the numerical analysis code “SLUSH-3D” is capable of analyzing slush fluid flows to a satisfactory degree of accuracy.

The right side of the above figure shows the solid phase velocity distribution in flow direction for slush nitrogen and slush hydrogen flowing through a circular pipe with an inner diameter of 15 mm at a pipe inlet flow velocity of Uin = 1.5-5.0 m/s.

In the case of slush nitrogen, as shown in the figure, at low flow velocities (Uin = 1.5 or 2.0 m/s) the maximum flow velocity shifts to the upper portion of the flow channel and exhibits an asymmetric distribution (heterogeneous flow). At high flow velocities (Uin ≥ 3.0 m/s) the flow velocity distribution exhibits top-bottom symmetry (pseudo-homogeneous flow) and approaches that of single-phase liquid nitrogen flow as calculated separately. When the solid fraction exceeded 15 wt.%, it was found the flow became more symmetrical (top-bottom) as flow velocity increased. This result is in agreement with experimental findings showing that when the inlet flow velocity was Uin = 3.6 m/s or higher, the flow became pseudo-homogeneous flow (refer to the figure in "Circular pipe flow and PIV").

To elucidate the pressure drop reduction phenomenon, SLUSH-3D was utilized for unheated slush nitrogen to consider the distribution of mass solid fraction for a circular pipe, the distribution of secondary flow velocity of solid particles for an equilateral triangular pipe, and the distributions of turbulent energy for a circular pipe and an equilateral triangular pipe. The conditions of calculation were inlet flow velocity Uin = 5 m/s, average solid fraction x = 15 wt.%, solid particle diameter of 1.3 mm, and heat flux q = 0 kW/m2.
Numerical analysis results are shown in the figure below. Here, turbulent energy k (m2/s2) is the sum of squares of the x, y, and z components of fluctuating velocity u, v, and w. The average value for the relevant pipe cross-section is kav [22, 24].

The upper left figure is the mass solid fraction distribution at the pipe cross section of a circular pipe with an inner diameter of 15 mm, employing the kinetic theory that considers collisions between the solid particle and the pipe wall, and among particles. During pseudo-homogeneous flow at high flow velocity, the phenomenon in which solid particles move towards the pipe center region is clearly illustrated.
The upper right figures show the streamlines, flow velocities, and flow directions (arrows) associated with secondary flow of solid particles in an equilateral triangular pipe with sides of 20 mm and a square pipe with sides of 12 mm. While there is hardly any secondary flow near the pipe center, two similar-sized vortices are seen at each apex, flowing from the center to the apex, and then returning to the center after travelling the pipe wall. Numerical analysis, not presented here, indicates that secondary flows exist for high-velocity liquid nitrogen and slush nitrogen flows in square and triangular pipes.
The lower right figures show the distribution of turbulent energy generating in liquid nitrogen for a circular pipe with an inner diameter of 15 mm, and an equilateral triangular pipe with sides of 26 mm having the same hydraulic diameter (D = 15 mm) as for the circular pipe. Even though the hydraulic diameter is the same, the influence of the turbulent energy generating at the apexes means that the average turbulent energy is greater for the triangular pipe than for the circular pipe.

The effects of the secondary flow of solid particles and the distribution of turbulent generating in liquid nitrogen on pressure drop reduction and heat transfer deterioration are described in "Circular, triangular, and square pipe flows".