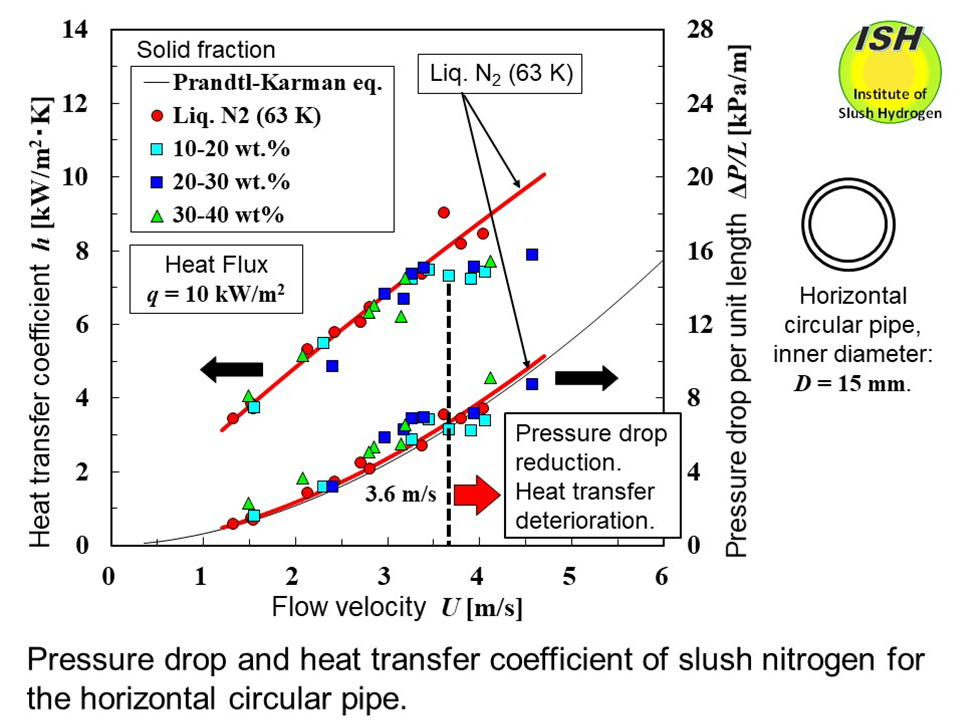 In the transportation of slush hydrogen or slush nitrogen via pipeline for use as the refrigerant for high-temperature superconducting (HTS) power transmissions and equipments, it is important to consider pressure drop due to straight pipes, as well as flow restrictions such as valves, converging-diverging pipes, and orifices. Such pipelines also often make use of corrugated pipes to absorb the cryogenic contraction (stainless-steel pipe contracts by approximately 3 mm per 1 m). Increased pressure drop during slush fluid transport requires greater pump power, thus reducing the overall performance of the transport system.

From our previous research results, it was found that in the pseudo-homogeneous flow of slush nitrogen (63 K) in horizontal circular pipes having diameters of 10 mm and 15 mm, at flow velocities of over 2.0 m/s and over 3.6 m/s, the maximum reductions in pressure drop were 25% and 23%, respectively, in comparison with liquid nitrogen (63 K). Also, we have reported that at heat flux of 10 kW/m2, the maximum pressure drop reductions were 23% and 17%, while at the same time the maximum deteriorations in heat transfer coefficient were 27% and 20% as shown in the above figure [20, 21].

The mechanism involved in pressure drop reduction and heat transfer deterioration is summarized as follows:
When pipe flow velocity increases and heterogeneous flow changes to pseudo-homogeneous flow in the case of heated or unheated flow, such that the solid particles move towards the center region of the pipe (refer to the figure in "Numerical analysis of slush flow by SLUSH-3D"), interference decreases between the solid particles and the pipe wall. Here, the pipe center region refers to the region inside the pipe excluding the thin liquid layer near the pipe wall in which there are few solid particles.
This movement of solid particles to the center results in a grouping of particles that suppresses the development of turbulence at the pipe wall, thus resulting in pressure drop reduction. Although heat transfer takes place near the pipe wall where the liquid layer contains few solid particles, the comparative lack of turbulence in this region means that the heated liquid near the wall is prevented from dispersing towards the pipe center, causing heat transfer deterioration.

When slush fluid is subjected to pumped transport over a long distance in combination with superconducting electrical power transmission, pressure drop reduction and heat transfer deterioration are extremely important from the standpoint of design data required to reduce the required power for pumps and to prevent quench propagation.

In other research on pressure drop reduction in slush fluid, only one experimental result obtained by Sindt et al. has been reported indicating the occurrence of this phenomenon in slush hydrogen flowing in a circular pipe having an inner diameter of 16.6 mm [32]. Only the pressure drop of slush hydrogen was measured, and there was no attempt to explain the reduction or to consider the heat transfer properties.
The relationship between the Reynolds number and the pipe friction factor for slush nitrogen flowing in a circular pipe with an inner diameter of 15 mm and slush hydrogen is shown in the figure below. The solid line indicates the Prandtl-Karman eq. for a single-phase liquid.

Taking unheated pressure drop test results for circular pipe, we applied the least squares approximation method to obtain a correlation equation between the slush Reynolds number ReSL using the apparent viscosity μSL = μL [1- (x/0.6)]-1.8 [33], and the pipe friction factor λ. Here, μL is liquid nitrogen viscosity. The correlation equation, as shown in the figure below, can accurately estimate the pipe friction factor from the flow velocity and volumetric solid fraction x (not mass solid fraction) [20].
The correlation equation takes pressure drop reduction into account, and will be effective for design work when estimating required pumping power for the transport of slush nitrogen. 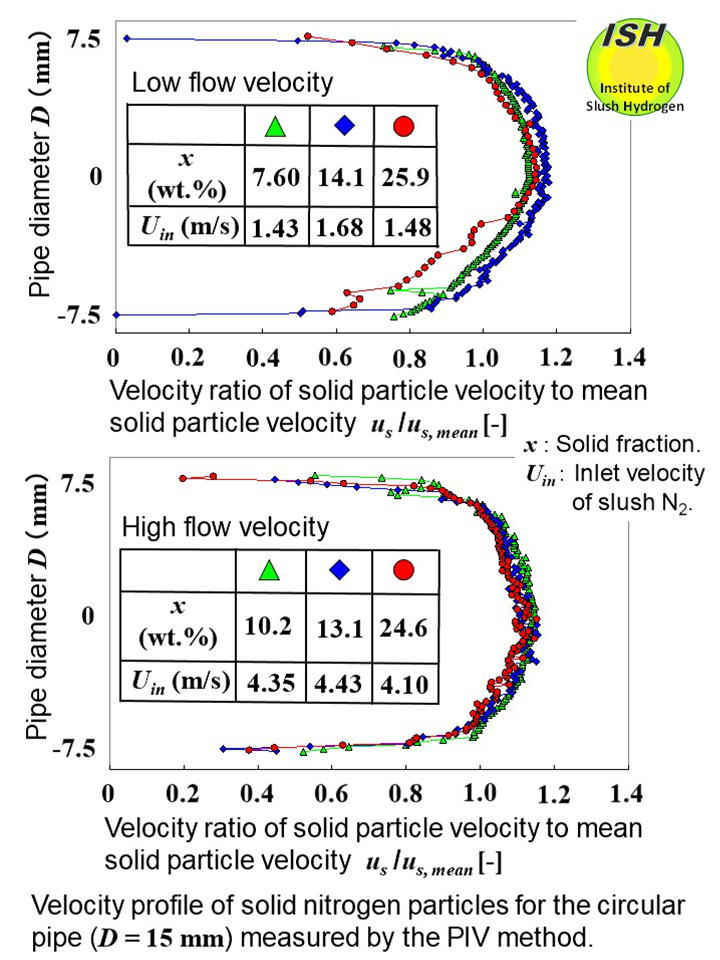 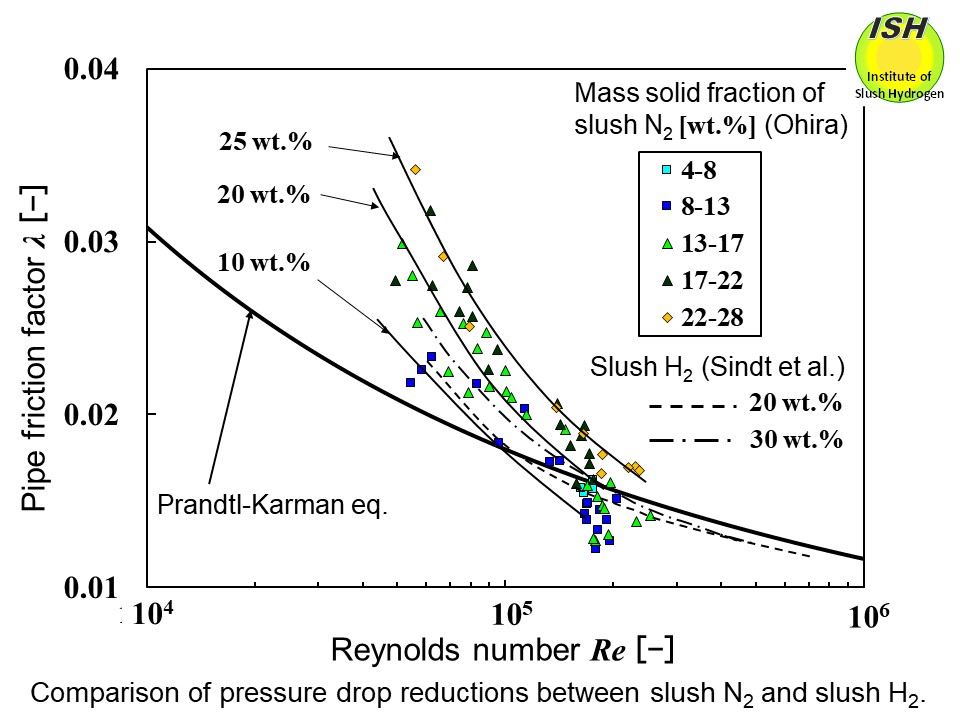 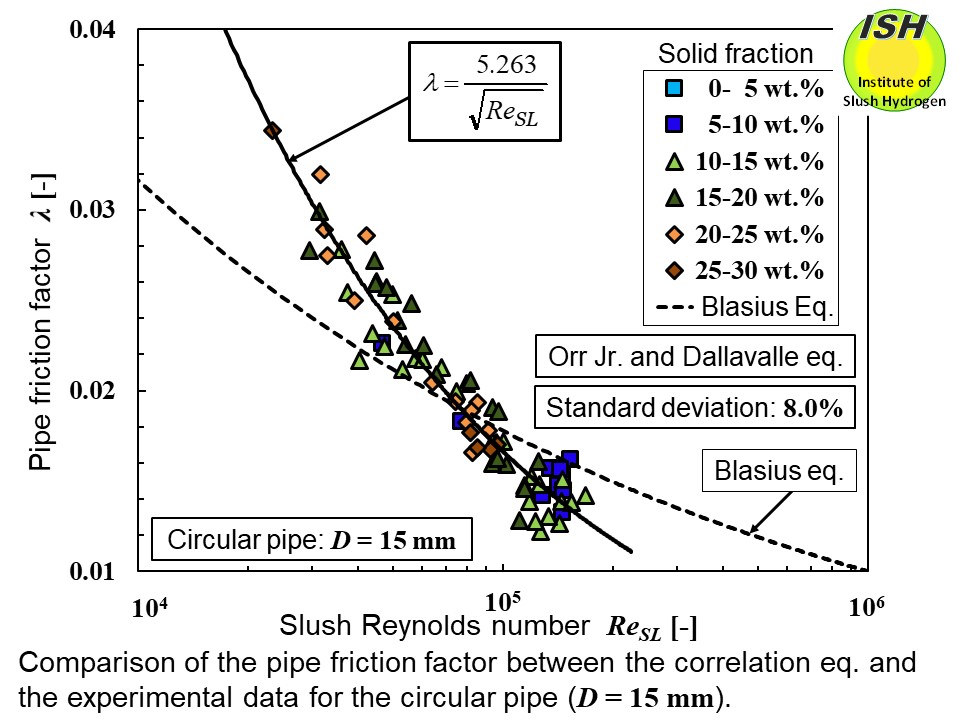