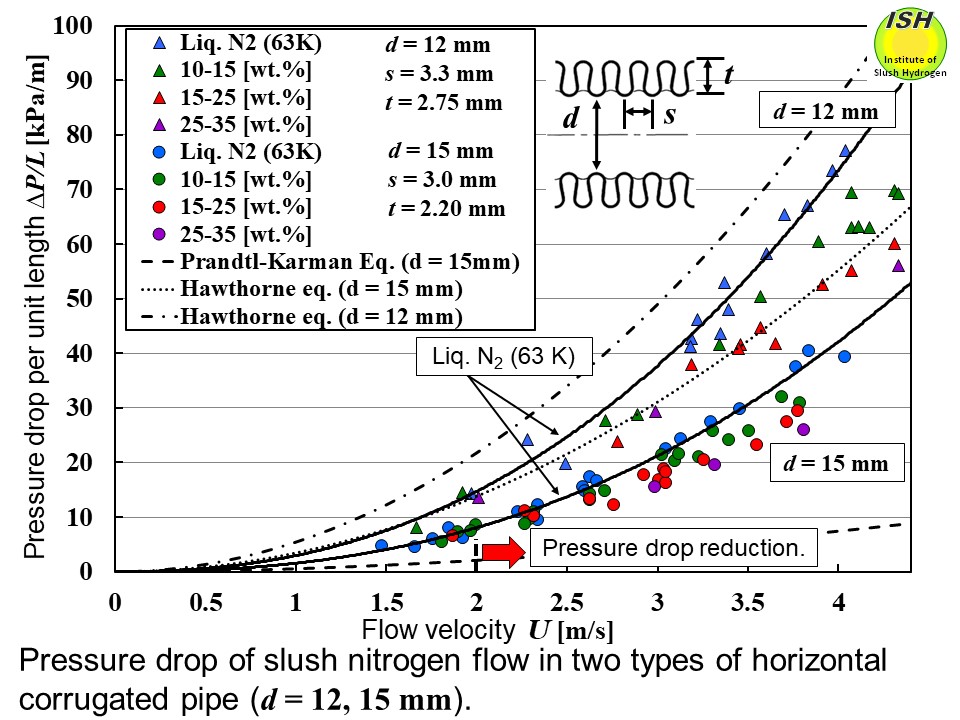 With respect to corrugated pipe, studies have been conducted by numerous researchers on pressure drop. However, most of these involve water or air at room temperature. The lengths of corrugated pipe in actual use are also typically short, and based on experience, designs have tended to assume that pressure drop will correspond to that in smooth-walled pipe having 3-4 times the length.

Corrugated pipes serving to absorb pipe contraction at cryogenic temperatures are essential elements of piping arrangements for cryogenic equipment. Increased pressure drop in piping necessitates greater required power for transport pumps, and is a cause of decreased system performance. In the case of stainless steel, for example, cooling from room temperature to cryogenic levels (77 K, 20 K, or 4 K) results in pipe contraction of approximately 3 mm per 1 m in pipe length. Accordingly, substantial stresses are placed on piping and equipment, which can easily lead to damage. In the case of the long-distance transport piping system, the total length of corrugated pipe would be substantial with pressure drop properties taking on major importance.

The figures below present the visualization of solid nitrogen particles inside the groove taken using a high-speed video camera and the PIV measurement results corresponding to experimental point where pressure drop reduction occurs, and experimental point where reduction does not occur, respectively [28]. Although vortex-shaped particle paths were confirmed within the grooves when the pressure drop reduction did not occur, this was not the case (vortex-shaped particle paths were not confirmed) when the pressure drop reduction occurred. It is considered that the liquid vortex (recirculation) occurrence within the grooves was accompanied by the captured solid particles, causing the loss of kinetic energy with respect to both the liquid and the solid particles, and resulting in increased pressure drop.
With the increased flow velocity described in the smooth circular pipe "Circular pipe flow and PIV", the solid particles tended to move towards the pipe center region. As a result, a liquid layer with few solid particles was formed in the vicinity of the corrugation, serving to reduce the interference between the corrugation and the solid particles. Furthermore, as shown in the figure below calculated by the numerical code SLUSH-3D [35], it is considered that the group of solid particles flowing at the pipe center region served to limit the development of turbulence or vortices in the liquid within the corrugation, as well as limiting turbulence diffusion towards the pipe center, thus reducing the loss of kinetic energy from the liquid and the solid particles. 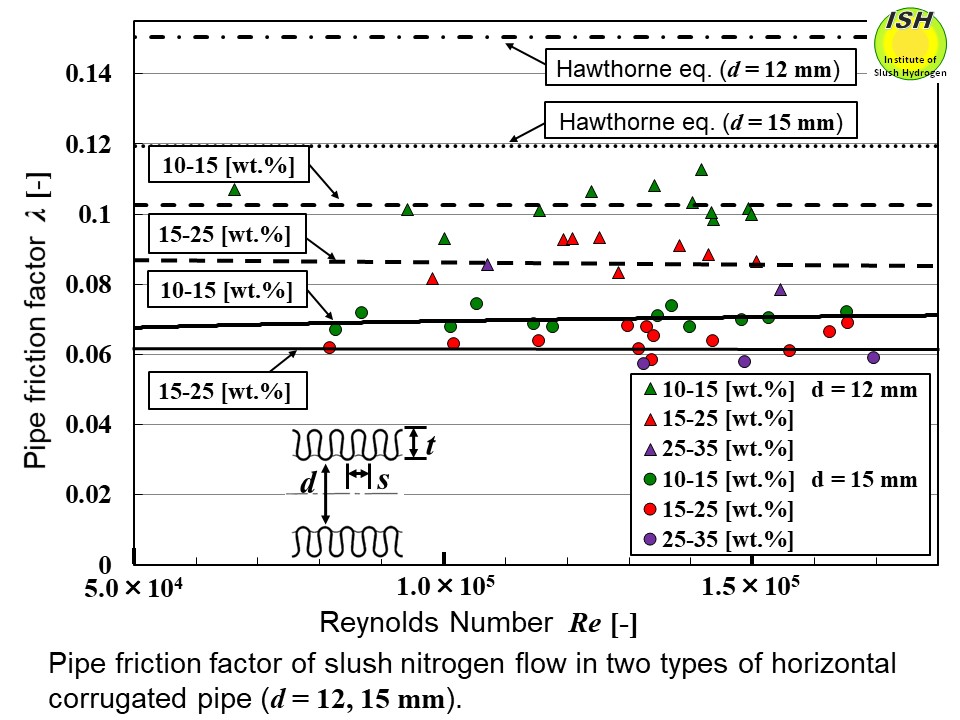 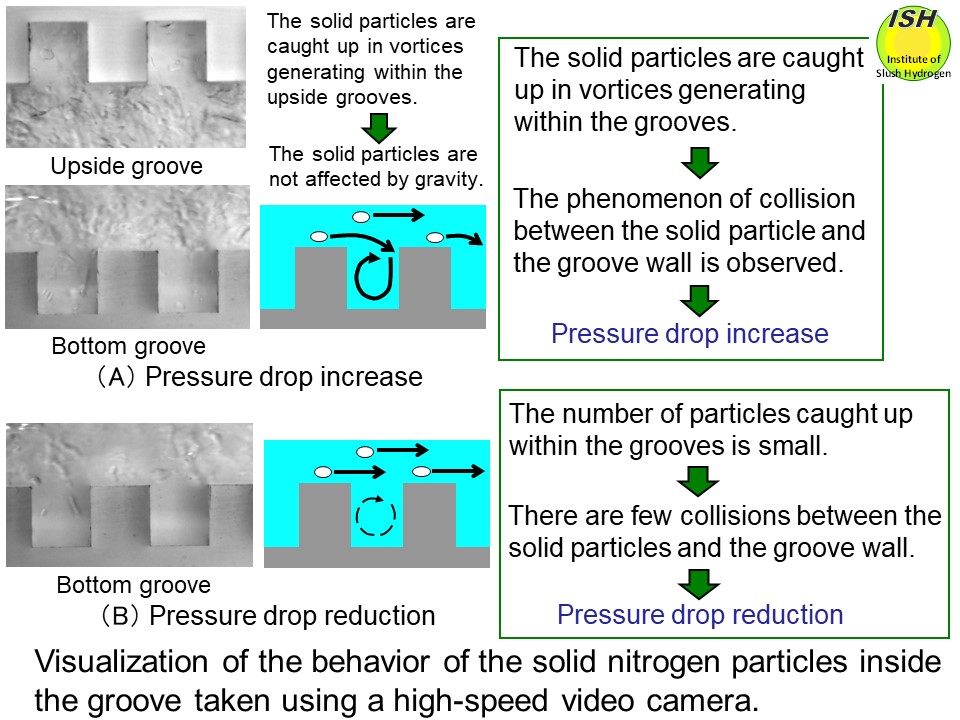 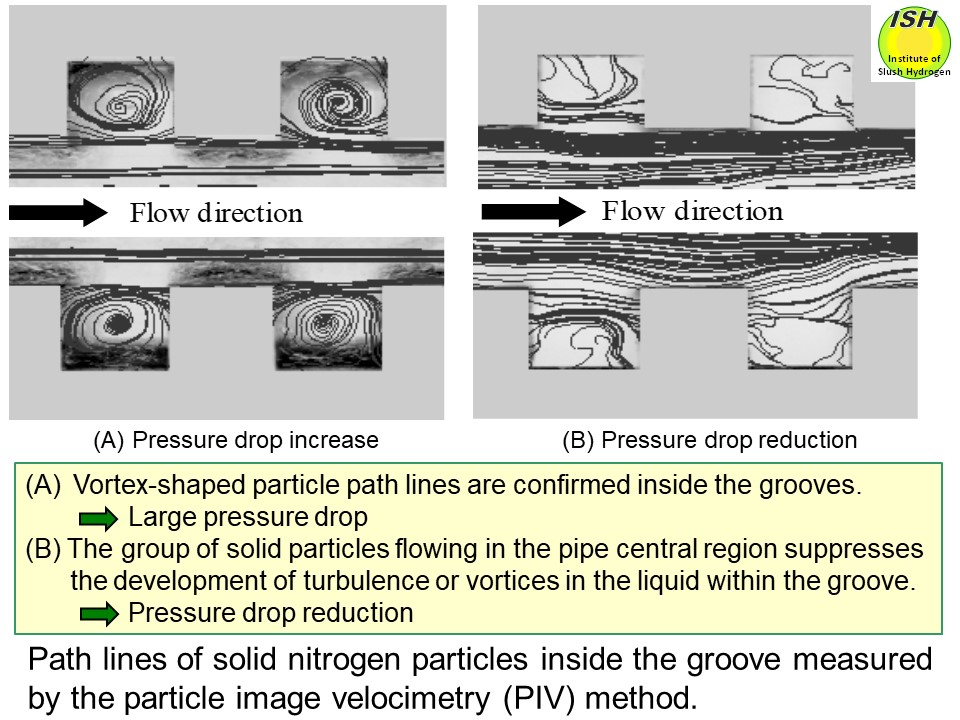 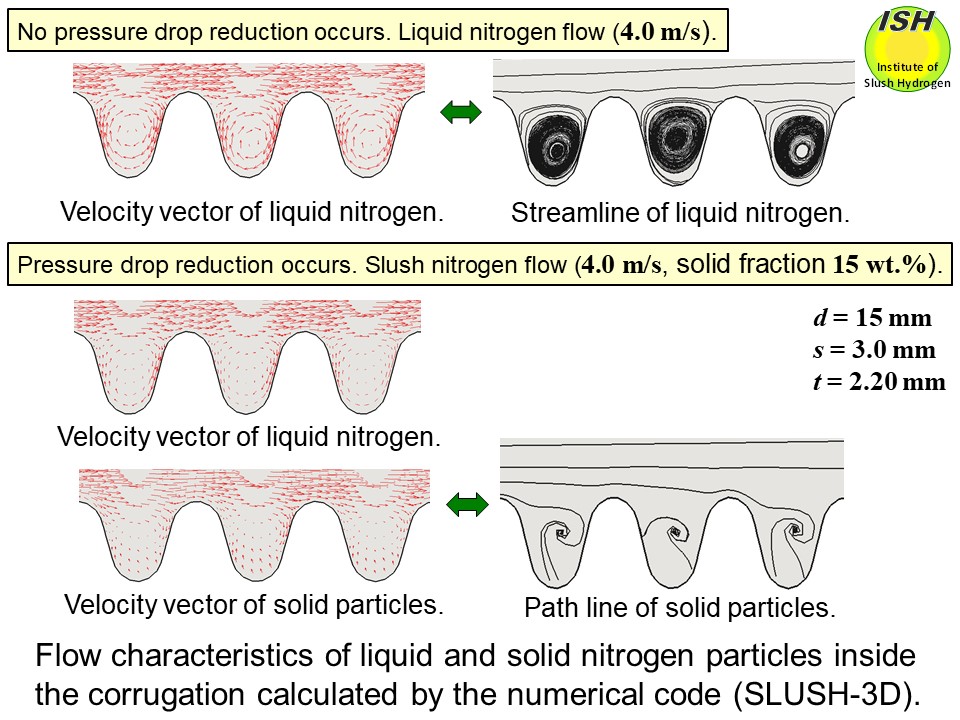